Scrum “vs” Kanban: differencies, similarities, how to choose

The meetup of Wednesday 16 June 2021, organised by the Agile Coach Manuele Piastra, featured the concepts of Scrum and Kanban. The discussion focused first on the characteristics of these two frameworks, and then went on to clarify when, why and how to migrate from one to the other.

Scrum is an interactive Agile framework that originated in the field of software development. interactivity is its distinctive feature – the mother methodology itself does not necessarily presuppose interconnection – which is well evidenced by the overall structure of the process. 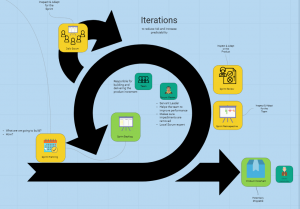 The term “scrum” comes from the world of rugby, as the whole process is carried out by a cross-functional, self-organising team over several overlapping phases, but trying to achieve the goal as a working unit.

Above that, the scrum master plays the role of servant leader, supporting the team in improving performance.

Next to that, the product owner is the key figure within the Scrum team, a kind of “director“: he works with the development team; he decides priorities on the work of the team, what needs to be done, what functionalities a product or service should have and he indicates when to release it on the market; he is responsible for ordering and communicating the product backlog, both to the team and to the stakeholders.

The time is divided into short interactions, called sprints, but with a fixed duration usually of two weeks (time boxing).

The sprint planning is the initial meeting for finalising the programme for the next two weeks and from which two outcomes (the sprint goal and the sprint backlog) are derived.
This is followed by two final sprints:

Finally, the daily scrum (or stand-up) is a 15-minute daily alignment between sprint planning and sprint review, to think about maximising progress and the daily time available according to the sprint goal.

It all starts with a product idea that is broken down into smaller, individually workable parts, which are then put on a list ordered by increasing priorities, the product backlog.

The product increment is a potentially releasable product (for functionality, improvement…), but for which the product owner will decide.

Although it is also a child of Agile and Lean, it is not considered a framework, but a method (improving on what already exists). Furthermore, Kanban principles are much closer to the mother principles than Scrum ones.

Let us recall some of them: 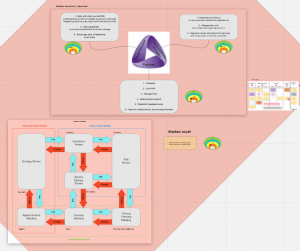 Kanban is characterised, as already mentioned, by a high degree of flexibility in the organisation of work. The roles within the process are not imposed in a definitive way – as it happens with Scrum – so that they can be apparently non-existent.

The team is more self-organised and is characterised by an overall view of the project progress, by an awareness equally spread among all collaborators.

There are two key figures within Kanban, with responsibilities similar to those of Scrum:

High flexibility is also found in time management. While Scrum events are all mandatory, in Kanban they are recommended.

They are mainly highlighted:

Time management in Kanban is orderly. The time-frames are well defined, which allows a drastic reduction in work, and the use of the cycle-time metric allows the effectiveness of the work to be measured, i.e. the time taken by the team to complete a project or task (low cycle-time = higher efficiency).

A further key element in Kanban is the WIP (work in progress), which is essential for improving the team’s performance; it is a “little” law, according to which the amount of product coming out of a system is inversely proportional to the number of items in progress.

Consequently, the WIP limit indicates the maximum (not fixed) number of kanban boards that can be used by the team, with the aim of optimising development and production work.