Guilds: a space for learning and sharing knowledge

Guilds are spontaneous and temporary aggregations of people around a single objective: sharing and learning.
They are born as a solution to the needs that Agile Reloaded coaches started to have, as an answer to several questions:

Who is a reloader?
What can we do to be attractive to people? How can we nurture growth, positive development and the possibility to evolve in AR? In which way can we put even more “People” – our people – at the centre of decisions, values and actions?

A little bit of history

The term Guild or Ghilda (of uncertain origin, perhaps German perhaps Anglo-Saxon), is one of the many terms used in the Middle Ages to indicate the phenomenon – common to all peoples – of associative ties between professional groups. The main feature of these associations was to involve and enclose all individuals with the same objectives, habits, desires, needs.

If the story teaches, man learns.

Where are guilds born?

In the modern corporate age, Spotify has developed an internal organisational approach that was inspirational for us and that we have adapted to our own context: the guilds structure. 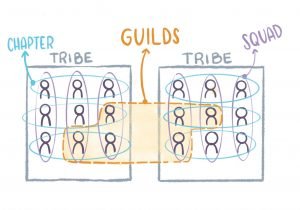 The Agile principles are the foundation of this “model”, that develops the organisation of work through different units: Squads, Tribes, Chapters and Guilds.

Guilds are groups that can span across the organisation. They allow people from different teams with well-defined rithms to address topics of common interest to participants, including those outside Spotify.

Guilds stimulate collaboration and teamwork, encouraging cross-contamination between squads and thus sharing knowledge across the organisation.

Guilds are therefore cross-team groups of people which were created with the purpose of learning and sharing knowledge.

Why experiment with guilds in Agile Reloaded?

As previously mentioned, guilds are born out of an urgent need to have learning moments, identifying solutions to be later proposed later to stakeholders and customers.

Agile Reloaded has innovative components of which we are proud: the learning dimension and the search for novelty and experimentation. In the past, learning took place individually and comparison was random. In addition, people in AR are different, they came from different places, they have unique backgrounds, they bring with them varied experiential baggage.

This gave rise to the need of a structure to learning, as well as established automatisms inside the same structure. At the same time, there was the need to work together, to have a common language, to be united by a shared objective.

In Agile Reloaded, the testing period of this new organisational model began after an Agile meeting in December 2019. This meeting brought to light some limitations of the previous organisation, convincing AR coaches about the need to create protected spaces where learning was recognisable and armoured.

The guild is the moment aimed at team sharing and team improvement, as it responds to the demand for rhythm and meeting to work together.

According to principles of autonomy and self-organisation, it is up to individuals to democratically propose the topics on which to focus the work of the guild; there are no authorities or guiding lines.

Here you are the iter of the decision-making process:

In Agile Reloaded, we create three working groups for each cycle of guilds. Once we have chosen the topic and identified the teams, the group can self-organise.

The guild has a duration of about 3-4 months and the participants meet weekly, according to the need to meet in a regulated manner.

This kind of organisation not only creates regularity in meetings, but also stimulates them providing a “remuneration”: “time is money”, goes the saying. Actually, meetings and interpersonal exchanges take place for business purposes during office hours. In addition, each guild has a personal budget that can be used during the predetermined working period. 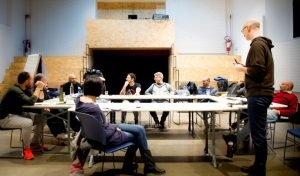 Like every organisational model, even guilds have pros and cons.

The main reason is that this structural format has not universally recognised and applicable rules! Each company is unique, each structure has its own groups and individuals – a situation that is already visible from a minimal internal comparison between Spotify and Agile Reloaded.

In Agile Reloaded, the biggest obstacle is in the lack of constancy in team working, due to different agendas of participants; so, generally, the problem is in the self-organisation of guilds.

With time and experience, objectives of the work have been better defined. About the themes, they have to be coherent with internal topics of Agile Reloaded. On the other hand, the output of the guild has to satisfy a main requirement: to generate a product sharing inside and outside the company context.

But whatever will be the result, we always celebrate the end of a guild and the work done together.

Guilds can assume different goals or be born for different reasons. Many external realities demonstrate the efficiency and the effectiveness of this initiative. For example, the Intré company (cousins of AR), that in three years has created not less that 45 different guilds and has made of this modus operandi its strength, right from the first contact with the client (click here for more information about Intré guilds).

In Agile Reloaded, several guilds have had small or great successes, with reflections both inside and outside our organisation. For example, the “feedback” guild – which we will discuss soon on our blog – and whose output is already being tested.

In this year and a half of learning testing, we have noticed potentials of this value, such as the creation of a shared culture, the birth and the sharing of knowledge, the development and consolidation of the team.

In AR, guilds serve a common objective, that reflects our unique and parent philosophy: to put “People” at the centre of projects, decisions and actions.