During the meetup on Thursday 26 of May, Fabio Gariboldi, reloader in Agile Reloaded, spoke about “emerging” management, exploring the theme from a psychological perspective. As a relations expert, Fabio wanted to make a contribution to the issues of the scalability of an organisation and of those forms of management that are established from below.

The dialogue began with an observation: in companies that are transforming their organisation, especially those who are facing with the Agile world for the first time and towards new organisational models centred on team dynamics and people empowerment, a question often arises:

“How to integrate this new vision with the existing one?”

But above all, it all starts with Fabio’s personal curiosity:

How do people organise themselves, to do tuning together?

An organisation is defined by a system of purposeful relationships, which involve people in an action more or less consistent with their goals, skills, individual needs and decided functional roles.

People are always at the centre of the organisational relationship system; and that is why it is important to try to understand their psychological and emotional needs, if you want to create a collaborative environment and an organisation that works.

Let’s start with a few questions:

A survey showed that the most relevant factors for people are, in order: 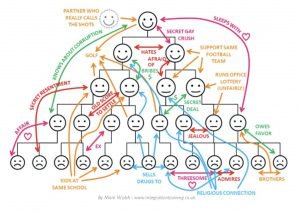 Also, the survey showed that good relationships (not necessarily those mapped out by the hierarchical-functional organisation chart) and a sense of belonging, strong goal orientation, shills and clarity of roles play an important role in this transition.

This consideration often creates the belief that everything can be resolved by acquiring strong skills and talents.
But skills alone can’t make a real contribution to the organisation, if the organisation itself does not create a context that allows them to be useful.

The arch of leadership indicates intention, what gives direction to the organisation and interpersonal relationships. It introduces the concept of consistency. 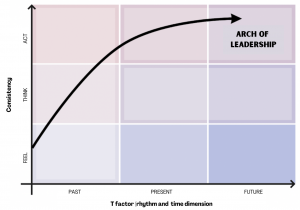 When people feel the greatest coherence between what they think and what they do and a strong orientation towards the future, leadership spontaneously emerges.

The term leadership comes from “to lead” and also from “to lead-in” and indicates an event in the system that emerges and enables people to relate in the direction of a purpose: the more people are aligned, the more they will be able to organise themselves together.

Let’s use a visual metaphor to understand the drive towards the future and the desired state (intention), that creates coherence and organisational effectiveness. 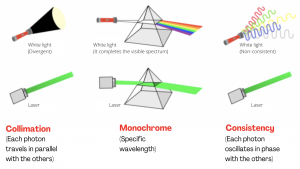 The light radiation of a light bulb stands for a disharmonious group of people, just as a laser stands for an effective team. The light of a laser, extremely focused and able to travel very far, differs from the one of a light bulb in three characteristics (which metaphorically can be used as a measure to recognise when leadership emerges in a team):

In order to put this metaphor into practice, we need to explore the answers to a fundamental question:

How is it possible that people have, since ever, spontaneously organised themselves to achieve goals or to share a task together?

The answer to this question requires a multidisciplinary approach (ethnographic, psychological, sociological and economic).

By relating the different points of view, we can say that there are three major archetypical designs (an archetype, in most generally, is a model, a form or a matrix of a concept), that guide our organisational decisions: Hierarchy, Group and Team. 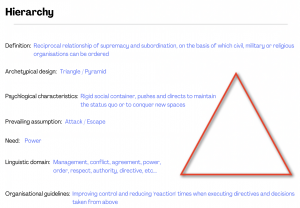 The triangle is the design that best represents hierarchy.

Hierarchy orients, it is a rigid social container, it pushes and directs.

Power is the possibility of drawing the attention of those who delegate this same power.
When we live in a moment of crisis or great stress, we are used to following who takes the initiative. 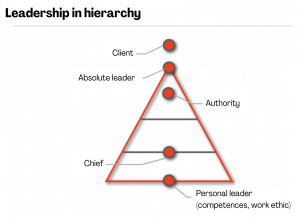 An entrepreneurial reality without an internal hierarchy is not necessarily the goal, hierarchy has its advantages and disadvantages and even in a modern company, it can still be useful to make timely choices and quickly align. 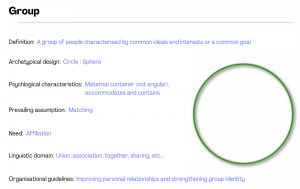 Alongside the triangle, there is another organisational design that has always been present in human communities: the group dimension, represent by the circle.

The circle offers protection and belonging, a “maternal” container that welcomes and contains, according to a need of affiliation. 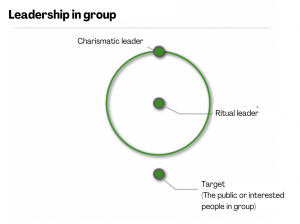 Belonging, branding, influence are emerging factors of the group dimension, which have become increasingly important in the modern company.

Its advantages for organisations are obvious. But, just like hierarchy, the group can also become dysfunctional. One example is mobbing: it is a typical phenomenon of group dynamics. 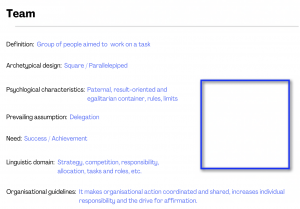 The first two archetypical designs instinctually emerge, responding to the basic need for survival and relationship.
The team, on the other hand, is a more rational archetypical design; it is not, therefore, automatic and is more difficult to maintain and bring its effectiveness.

The Team is represented by the square, a “fatherly” egalitarian container, that is less soft than the group and result-oriented (the equal sides are the rules, the edges define the operational limits that the team gives itself in order to share the responsibility of the work). 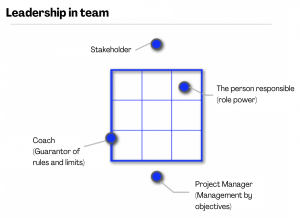 The team identifies a group of people aimed at carrying out a task or achieving a goal, sharing a set of rules and limits that foster mutual trust. The individual responsibility is greater and the ability to delegate and to work as a team is fundamental.

Trust in a team has to be nurtured and continuously sought. For these reasons, team building is highly complicated when into a stress dynamic (positive or negative), where people would instinctively tend to find refuge in the hierarchy and the group..

“But how does the team integrate with the rest of the organisation?”


The team and the organisation

The team represents a very strong dynamic and it is fun to play with it, if you can align in rhythm and direction, travelling in a coordinated way (the coherence mentioned above).
Team building in today’s “working world” is really challenging: everything is constantly changing (goals, rules, players); this makes everything more complex, but also incredibly engaging and satisfying (when you succeed).

In the team there is not a leader as in the hierarchy. The coach is part of the team, but he is delegated by others to keep the focus on the fundamentals, rules and limits, and to draw the attention to the goal. Everyone in the team is responsible and able to respond to his/her own area: the individual is accountable to the result, not for the task assigned to him/her.

The team, like the group or the hierarchy, has advantages and disadvantages: its complexity, for example. Team members must have the psychological maturity of knowing how to postpone their own individual gratifications; sometimes, this is so engaging that they could temporarily “forget” their own needs.

Therefore, when talking about these three organisational figures, you have to get away from the “right – wrong” logic and, rather, assess their impact in terms of “useful – useless”.

At this point, Fabio Gariboldi speaks about a “variable structure” team, a team of people able to dynamically move in the three organisational dimensions (Hierarchy, Group and Team), depending on the objective, the moment and the people involved. 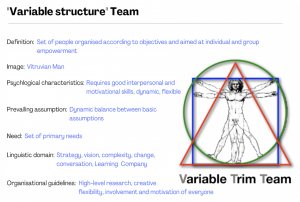 The suggestion is that you can achieve the greatest possible usefulness if you are able to align yourself and to play your role, in a coherent way, in the organisational figure that is most appropriate to adopt in that moment.
For example, when you need sharing and creativity, the group is perhaps more suitable; but if there is a urgency that requires a rapid choice, maybe it could be useful to have one person who, by role, takes responsibility for the direction to be taken and for the quick alignment of other members of the group.

Achieving a “variable structure” organisation depends above all on the level of psychological and emotional maturity of the individuals who are part of it. It is not a universal solution, but a model to strive for in a process of continuous improvement.

We must not find the perfect combination and drop it on individuals, but start from psychological factors, from individuals, to understand how to help them acquire this organisational agility. In this way, the most useful design will spontaneously emerge or it will be easier to adapt the team’s initiative to the pre-existing organisational structures.

This perspective seems to offer a new point of view to the various attempts at scaling up agile frameworks: putting individuals, their maturity and awareness at the centre, to take Coherent organisational actions and to achieve the structure from the search for the greatest possible utility.

Read more posts from the same category: Strategy and organisation