Decision-making in groups, between the need for consensus and the risk of conformism

“Decision-making processes in groups often oscillate between the need to generate consensus on the decisions taken and the risk of excessive flattening of the opinions generated by team members.
Conformity is, in fact, the “dark side” of consensus”.

Luca Baiguini is professor of “People Management and Organisation” at the School of Management of the Policlinico of Milan, at Cifriel and at the Masters of the University of Udine. During the meetup on tuesday 28 September 2021, organised by Agile Reloaded, he talked about decision-making processes within teams.

Relying on his experience in the field of management training (from leadership to team management, from negotiation to problem solving, communication and so on…), Baiguini built his original and instructive ‘lesson’ in three parts:

“It all starts with a story”.

Around the mid-1980s, the owner of the Getty Museum in Malibu was working on building his art collection, when he was approached by a Swiss art dealer with a tempting offer: a Greek kouros from around the 5th-6th century BC in extraordinarily good condition. After discussions and negotiations, they established confidentiality agreements: the museum would keep the statue for the appropriate time to allow all the necessary tests to establish the authenticity of the piece.

After just over a year of in-depth analysis, the Getty Museum’s committee of art experts declared the statue to be authentic and the owner was able to conclude the purchase for around $10 million (a rather high price for the time).

The sculpture, or rather the decision-making process used to detect its authenticity and legality, was the new pride of the museum. Le methodologies used in tests began to be published in all the newspapers and several art critics were invited to visit the kouros.

However, the first problems began to arise: one by one, art critics who looked at the sculpture began to identify it as a forgery; in some cases, even a glance was enough for them to understand it.
The much-acclaimed process of analysis began to crumble at every stage. The fatal blow finally came when it was announced that a sketch cast of a kouros similar to the Getty Museum statue had been found, although difficult to date. 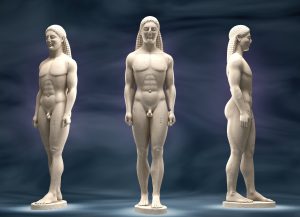 A story always hides a lesson, an advice, a warning.
The story of the Getty Museum kouros highlights the relevance of the decision-making process on the outcome of the story. Actually, a more careful analysis is needed to unearth its true meaning, starting with a simple question:

What happened to the museum
and to the scholars involved in the analysis process?

There are two – often simultaneously – ways to approach the response.

It occurs when, for a failure, the people involved are blamed; it is based on the statement that if there is a critical mass of “pirla” in a group of people proportional to the rest, they will prevail.

It concerns the case where, for the error, one does not blame the people involved but focuses on the structure of the decision-making process.

To repeat what was said earlier, these are not just stories.

In reality, when we are faced with failure, one of man’s innate cognitive biases is to overweight the importance of people over structural factors of the decision-making process (whether this has positive or negative effects). It is called Fundamental Attribution Error. On the contrary, we have to focus attention and sensibility on the functioning, on the structure of the decision-making processes, rather than on the individual persons involved.

These are two key concepts when analysing the work of teams.

It indicates the adherence of the people in a team to an idea, a project or a person (leader). In this sense, leadership can be expressed as the “ability to generate consensus”. Obtaining consensus brings positive results (e.g. the engagement).

From a first reading of the case of the Getty Museum, it seems convenient for the museum to obtain consensus on the idea of authenticity of the statue, as it would have allowed the construction of a common identity of the organisation. At the same time, the outcome leads to a series of questions: “How were the questions asked and to whom?”, “How much was the weight of social pressure for the statue to be recognised as authentic?” and “How knowledgeable about authentic pieces were the scholars who took part in the process of analysing the kouros, before being called there?”.

It underlines the tendency of certain types of groups of people to be so supportive of consensus that they inhibit dissent. Conformity is the “dark side” of consensus, that shadow which constantly follows a condition of general agreement and which, if badly managed, leads to a “cul-de-sac”.

Getting out of this “cul-de-sac” is possible, but it requires careful study and attention in the information collection phase.

First of all, we must be aware of the existence of two modes of data collection within a decision-making process.

In such a situation, everyone contributes, evaluates and shares solutions in an unbiased way, based on their knowledge, without preconceptions. This is an effective form of information-gathering, but with a high risk of conformism, which can lead the whole group towards an inability to produce critical thinking.

This practice goes back to Socrates and the maieutic: an antithesis is posed to the initial thesis in order to reach the closest synthesis to the truth. It is the condition in which everyone, in the system, plays a role or is based, bringing new evidences in support of their thesis (the criminal trial, for example, or the figure of the devil’s advocate who, finding dissimilarity within the single thought that is emerging, explicitly goes against the thesis). In this circumstance, a sort of defusing of conformism takes place and efforts are made to obtain and maintain consensus.

We can find several examples of part assignment by understanding these differences.

This practice does not serve to defuse conformism, but helps to give a solid structure to the decision-making process: “putting on and taking off the hat”, wearing several hats without making any of them explicit.

This tactic imagines three rooms and the protagonists, mutually indispensable. 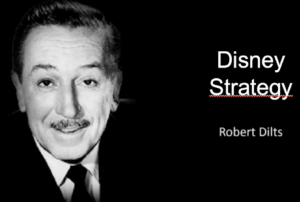 At this point, it is necessary to dwell on the three keywords of the deliberative process.

Research
The approach used is vertical and qualitative: demonstrable and documented ideas, concepts and advances are sought before proceeding with the decision-making process.

Creativity
In this case, the approach is horizontal (or lateral) and quantitative: something is sought that shifts the plane of perception of individuals. It is the brainstorming paradigm: to produce as many ideas as possible, aware that, among the many rejections, the most correct and effective opinion for the situation will result.

Innovation
Unlike the two previous approaches, it is not an approach but a product of the problem solving process, which functionally alternates between “creativity” and “research” moments, thus leading to “innovation”.

Following either approach leads to two key-figures of the decision-making process:

After careful study and reflection, and following a thoughtful and detailed listing of the main items that characterise the decision-making process, our host was able to construct a matrix of team decision-making processes: a four-quadrant, rhomboid-shaped matrix in which the various dimensions intersect, offering the most effective strategy. 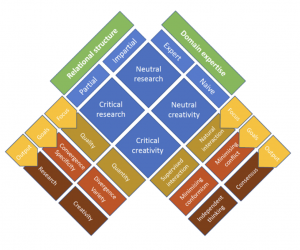